La Grande Italia: The Rise and Fall of the Myth of the Nation in the Twentieth Century Emilio Gentile 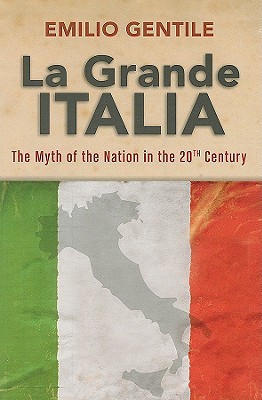 La Grande Italia traces the history of the myth of the nation in Italy along the curve of its rise and fall throughout the twentieth century. Starting with the festivities for the fiftieth anniversary of the unification of Italy in 1911 and ending with the centennial celebrations of 1961, Emilio Gentile describes a dense sequence of events: from victorious Italian participation in World War I through the rise and triumph of Fascism to Italy’s transition to a republic.Gentile’s definition of “Italians” encompasses the whole range of political, cultural, and social actors: Liberals and Catholics, Monarchists and Republicans, Fascists and Socialists.

La Grande Italia presents a sweeping study of the development of Italian national identity in all its incarnations throughout the twentieth century. This important contribution to the study of modern Italian nationalism and the ambition to achieve a “great Italy” between the unification of Italy and the advent of the Italian Republic will appeal to anyone interested in modern European history, Fascism, and nationalism.Best Books for Special Interests, selected by the American Association of School Librarians, and Best Books for Regional General Interests, selected by the Public Library Association

Comments
Comments for "La Grande Italia: The Rise and Fall of the Myth of the Nation in the Twentieth Century":