A Chefs Tale: A Memoir of Food, France and America Pierre Franey 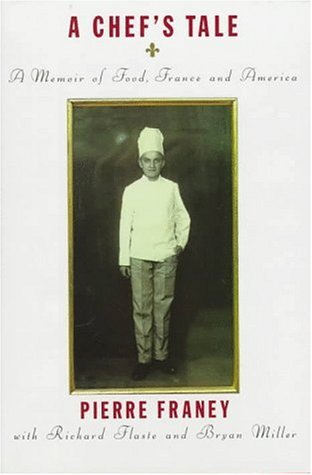 His memoir reflects his relish for life as well as his mastery of his profession. Before he created his 60-Minute Gourmet column in the New York Times, before he wrote his celebrated (and best-selling) cookbooks, and before he entered our homes via television, Pierre Franey presided over the cuisine at two of the greatest French restaurants ever to be opened in America - as executive chef first of the legendary Le Pavillon, then of La Cote Basque. And now, with style, charm and affection for his native France and adopted America, Franey takes us into his life in the world of food, interweaving his story with irresistible recipes and, here and there, impulsively giving away a chefs secrets.

He takes us into his childhood in Burgundy, where the bountiful produce and the high respect accorded to the preparation of food grounded Franey in a tradition that would serve him well when he began his apprenticeship at age fourteen in Paris restaurants - the first level of his classical training.

The lessons he learned there - the simple artistry that results in a fine omelette, the importance of a well-organized kitchen, the esthetics of texture and color and combination of flavors - are as valuable today as ever. And as Franey reveals the essence of French country food - civet de lapin, boeuf en daube, sole meuniere - we begin to understand cooking fundamentals as the masters do. Franey escorts us around prewar Paris as he tells the story of his coming of age in (and out of) the kitchen, and of his true professional beginnings at the fabled Drouant.

He shows us the great 1939 New York Worlds Fair, where Le Pavillon was born. He relives the days of Americas French food revolution and speaks with gusto about such celebrated culinary figures as the incomparable Henri Soule, and Craig Claiborne, his longtim

Comments
Comments for "A Chefs Tale: A Memoir of Food, France and America":