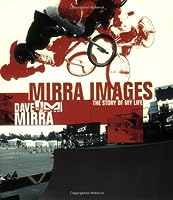 Since age ten, Dave Miracle Boy Mirra has been defying gravity and changing peoples minds about what can and cant be done on a bike. But in 1993 he lived up to his nickname in ways that his fans could never have anticipated. Six months after he was injured by a drunk driver and told by his doctors that he would never ride again, he was back on his bike, competing in -- and winning -- high-profile BMX events. Since then he has gone on to win more X Games medals than any other competitor -- in any event -- and has inspired a devoted following always hungry for a new miracle.

Mirra Images captures all of Daves most daring and explosive tricks -- carving flairs, wallride-to-tailwhips, and his record-setting nineteen-foot air -- in stunning color. In addition, Dave delves into his past and his personal photo album to shed light on his rise to the top of the action sports world and reveal a side of himself that has never before been seen.

This action-packed photo-autobiography is the first ever look into the life, times, tricks, and bikes of the biggest of all BMX superstars.