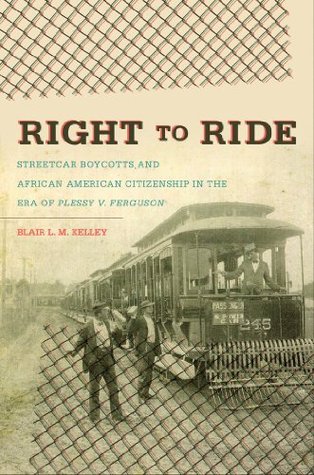 Through a reexamination of the earliest struggles against Jim Crow, Blair Kelley exposes the fullness of African American efforts to resist the passage of segregation laws dividing trains and streetcars by race in the early Jim Crow era. Right to Ride chronicles the litigation and local organizing against segregated rails that led to the Plessy v. Ferguson decision in 1896 and the streetcar boycott movement waged in twenty-five southern cities from 1900 to 1907.

Kelley tells the stories of the brave but little-known men and women who faced down the violence of lynching and urban race riots to contest segregation.Focusing on three key cities--New Orleans, Richmond, and Savannah--Kelley explores the community organizations that bound protestors together and the divisions of class, gender, and ambition that sometimes drove them apart. The book forces a reassessment of the timelines of the black freedom struggle, revealing that a period once dismissed as the age of accommodation should in fact be characterized as part of a history of protest and resistance.