The Measure of the Cosmos: Deciphering the Imagery of Icelandic Myth Pétur Halldórsson 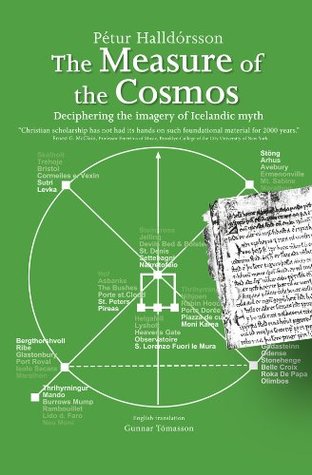 The principal refernece points of the measure involved were the motions of the heavenly bodies and the cardinal directions. In fact, man’s image of creation was a projection on the terrain of the Zodiac, anchored to prominent landmarks on the ground and the Sun’s annual path around the Zodiac. The image of creation was at once sacred and a practical sun watch. The ancient approach is akin to a yardstick, which applies not only to the ancient sun watch in Iceland, for my research has established that the like reference frame was used in antiquity in all parts of the globe.

The ideas outlined in “The Measure of the Cosmos” are the mature product of over 27 years of research bringing to light a “blueprint” up on which cultural areas were built. I suggest that such an image of creation initiated the famous Stoneage constructions in Europe and underlies cultivated areas of the world: Jelling, Denmark - St.Denis, France - the Vatican, Rome - Marble arch and the Tower of London - Glastonbury, Avebury and Stonehenge in Somerset are rooted on a grid, suggesting their location is according to a measured plan that predates them.

Comments
Comments for "The Measure of the Cosmos: Deciphering the Imagery of Icelandic Myth":